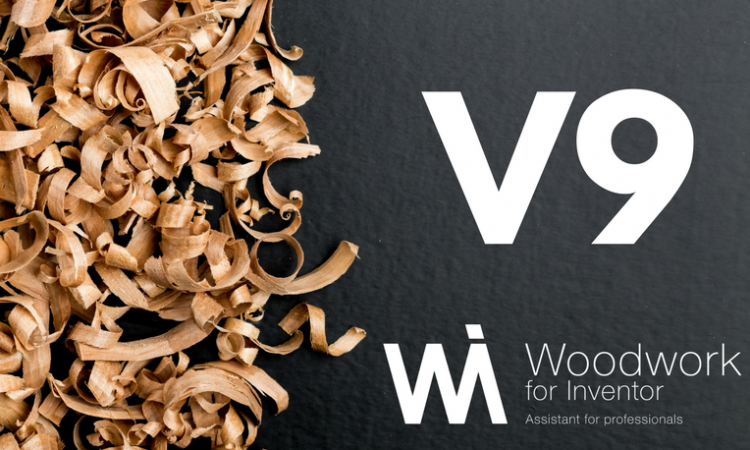 Another year has passed, and here’s the launch of a new version of Woodwork for Inventor.

Since the beginning, we have been praising that we have ideas for the next 5 years and speculated that after that we might take a rest. But reality turned out to be completely different – today’s backlogs is exploding from ideas and goals. It shouldn’t have been a surprise because the amount of Woodwork for Inventor users is growing every week and the more users – the more feedback we get. So when we gather all user’s remarks, partner suggestions, our own insights we have a problem not with the lack of ideas but with the necessity to choose what to develop next. So we sort it, prioritize and always push ourselves to do as much as possible.

And we will do our best to keep the pace.

So What’s new in V9? First of all, I would like to emphasize the fact that this version is primarily an improvement version. If the previous versions were all about growing (every year we launched new features like drawings, CAM, Nesting, etc.) this release, we focused on improving our existing software and its functionality to better meet user needs.

One of the biggest improvements is the change of the internal Woodwork for Inventor structure. This is already the second internal structure in the history of Woodwork. The first one was 5 years ago. The Venture Capital, which was then just about to invest in us, conducted our software audit. The conclusions about that time Woodwork for Inventor V4 were ruthless – the monolithic code, the rigid structure, the very poor possibilities for software development, etc. Then we hired a software system specialist to rebuild our entire internal structure, so the V5 came out with a brand new structure and it worked for three next versions.

Today, we no longer need external competence, we can already evaluate the situation and change it ourselves. During the years since the V5, our software has grown significantly and in order to manage further development, it was time for a qualitative transformation of Woodwork for Inventor. With the new framework, we became much more flexible in developing new features and we can do it faster. The user will not see the framework in the toolbar, but he will feel the difference while working with Woodwork for Inventor – the software became more stable and much faster – some operations with databases have accelerated dozens of times.(Video)

Of course, the V9 has experienced not only internal rearrangements but also functionality improvements. The main improvement – Material Replacement. In Woodwork for Inventor user can use a traditional method of working with materials, but we are promoting a different concept, which we believe is superior to the traditional way (Video). This year, after reviewing our experience and user feedback, Material Replacement has been radically improved (Video).

Among the new things, I would emphasize the emergence of the G-Code post-processor. Up until now, we used to focus on major CNC machine makers and their software systems, but in V9 we turn to G-Code programmable machines with this version. As a rule, such the machine is the choice of a smaller furniture maker, so now Woodwork for Inventor can benefit them as well.

This is it about V9 and while you will be downloading a new version we’re jumping to V10, where new tasks are waiting for us. There is already a list of what the market needs and what we would like to put in V10 ourselves. However, we would need a 10x bigger team to materialize all our ideas, therefore a big challenge of picking out what’s next is waiting ahead. Good news is that we are excited about it and believe in Woodwork for Inventor. We hope you do too and don’t forget to give us your feedback, it’s extremely valuable to us.

Next ArticleDatabase management and teamwork in Woodwork for Inventor